Before yesterday morning was out, news arrived of yet another school shooting, this one at the Santa Fe, Texas, high school. Nine students and one teacher were killed and ten others wounded, including a school resource officer who at last report was in critical condition. Once again the shooter was a white man: 17-year-old student Dimitrios Pagourtzis surrendered to law enforcement at the scene and has confessed to the crime.

Word spread quickly on social media and via email, and despite the short notice about 15 Vineyarders gathered at Five Corners at 5:30 to mark the event, honor the dead, and call for stronger gun-safety laws. Women’s Committee members Maria Black, Sarah Nevin, Sheila Lyons, and Susanna Sturgis were among those attending. Both the Martha’s Vineyard Times and the Vineyard Gazette covered the event.

Many passing vehicles honked, waved, or called out their support. One fellow, however, driving a late-model pickup that was almost big enough for a tiny house, held up traffic while he vociferously protested the protesters.

By the way, there was a school-related shooting in Illinois on Thursday, fortunately with no fatalities; the only injury was to the gunman, a 19-year-old — you guessed it — white guy. Friday night in the Atlanta area, one woman was shot and killed and another wounded near a high school graduation. Reports are still sketchy, and it’s not clear if the shooting had any connection to the graduation. 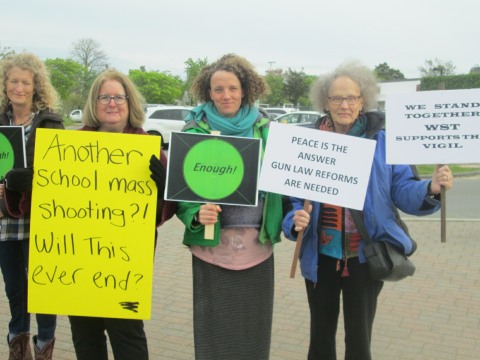 Women’s Committee member Sarah Nevin is at right; next to her, holding the green “Enough!” sign, is her daughter Katrina. 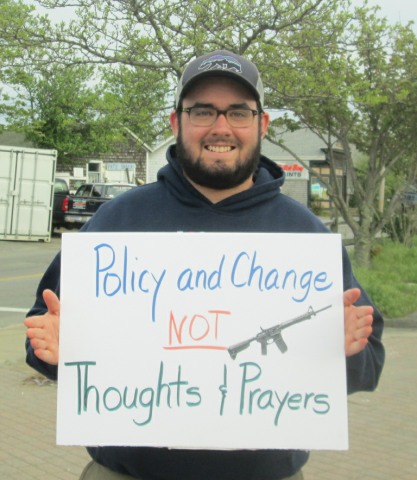 Keith Chatinover, member of We Stand Together / Estamos Todos Juntos and senior at the MV Public Charter School.

This site uses Akismet to reduce spam. Learn how your comment data is processed.